The End of Everything by Megan Abbott


Lizzie Hood and Evie Verver are two inseparable 13 year-old best friends who share in everything from field hockey to picnics at the lake. Evie’s older beautiful sister Dusty is sophisticated and loved from afar by all the schoolboys, a dynamic but damaged young woman who offers the girls an exciting view of what’s to come in their own near-future. Evie’s father is a handsome, strong, and giving man who has replaced Lizzie’s own distant father.

So when Evie goes missing one afternoon after school Lizzie is left feeling not only frightened for her friend but incomplete in herself. As the Verver family stumbles along day by day with a fruitless police investigation, it’s up to Lizzie to pull together fleeting impressions and half-remembered comments made by Evie that might hold the answer to where she’s gone or who may have taken her.

Did she have a secret boyfriend? Were there troubles with classmates? Problems at home? As Lizzie’s pubescent crush on Mr. Verver grows, he entertains her with stories of his own adolescence and dazzles her with visions of what she can look forward to where heartache and true love are concerned. As dark intentions and veiled ambitions are slowly revealed, Lizzie is forced to come to a decision on exactly how much she should keep hidden and what she should acknowledge.

Author Megan Abbott’s narrative is exquisite, atmospheric, muscular yet subtle, exploring the mythic essence of truth as much as developing the story by parceling out clues and observations on characters and the secret spheres they inhabit. The plot is naturally and intricately built upon Lizzie’s memories, dreams, and sometimes imperfect understanding of the Verver family and the larger world around her. Like in life, small gestures take on greater significance: A hesitation, a glimpse, a half-spoken whisper, a touch on the wrist become powerful earmarks and signs for a pubescent girl.

Abbott puts as much emphasis on the pained human condition as the whos and whys of the tense mystery. The often cruel and confused motives of the human heart underscore a grand and involving maze of conflict, giving the story a broad and gripping canvas. This is mainstream literature by way of noir anguish and page-turning suspense. Dramatic, complex, poignant, and gut-plucking, The End of Everything is the kind of realistic yet dark-hearted coming-of-age story that’s likely to reintroduce you to the skeletons in your own bricked-over family closet.

The Conclusion, LKW Launches, and How Brian Keene Almost Blew Up the World

Lots of updating to do, so here goes.

Speaking of headlines, my tribute to my pal Brian Keene, “How Brian Keene Nearly Caused the Nuclear Apocalypse and Yes, Every Word of This is True, Mostly,” taken from this year's World Horror Convention Program Book, has been posted on Brian's site. Don't just read it, my friends, learn from it. For God's sake, learn from it!

An all-new original story of mine "The Conclusion" has been posted over on Horror World. Check it out for free.

The 4th issue of NEEDLE magazine has just hit, including work by Ray Banks, Todd Robinson, Patti Abbott, Scott Morse, Don Lafferty, and many others, including my own contribution "Osteoporosis."

Not sure when it will hit, but be on the lookout for my lengthy tale "The Void It Often brings With It" in an upcoming issue of ELLERY QUEEN'S MYSTERY MAGAZINE.

Several more terrific reviews have come in for my little slice of noir hell EVERY SHALLOW CUT, including one by Paul Goat Allen over at the B&N Bookclubs, who says, in part: "This was a fascinating – and fast – read. Every Shallow Cut isn’t quite crime fiction or horror, but a story that deftly treads the boundaries between both genres. If I had to categorize it as anything, I’d call it a darkly nuanced thriller since it’s essentially an exploration into what happens when the stresses of modern day life become too much to handle for one man. And there’s a real sense of authenticity and timeliness here – Every Shallow Cut does a brilliant job of reflecting the feelings of economic and existential hopelessness that so many people are experiencing in today’s society. This powerful little noirella will surely delight – and disturb."

Also, a Milwaukee Public Library blog that compares Every Shallow Cut to Sam Raimi's The Evil Dead. Finally, I can hold my head high!

Jessica Blanchard of The Hipster Book Club had these generous words to say: "While he may not become a tween girl favorite, Tom Piccirilli's ability to relate the maddening but human experiences of unfulfilled hope or fear of failure through an evocative and exhilarating story makes EVERY SHALLOW CUT a standout. The story will resonate long after the short time it takes to read."

Since our May $.99 sale for NIGHTJACK was such a hit, we're doing another one in June. Get my SHORT RIDE TO NOWHERE noirella for under a buck on Kindle, Nook, Smashwords or just about anywhere!

SUPERNATURAL NOIR ed. by recent Bram Stoker winner Ellen Datlow is due out next week, including a tale from me. If you don't mind a little horror or fantasy mixed with your crime and noir, check it out. Here's the TOC:

"The Dingus" by Gregory Frost
"The Getaway" by Paul G. Tremblay
"Mortal Bait" by Richard Bowes
"Little Shit" by Melanie Tem
"Ditch Witch" by Lucius Shepard
"The Last Triangle" by Jeffrey Ford
"The Carrion Gods in Their Heaven" by Laird Barron
"The Romance" by Elizabeth Bear
"Dead Sister" by Joe R. Lansdale
"Comfortable in Her Skin" by Lee Thomas
"But For Scars" by Tom Piccirilli
"The Blisters on My Heart" by Nate Southard
"The Absent Eye" by Brian Evenson
"The Maltese Unicorn" by Caitlín R. Kiernan
"Dreamer of the Day" by Nick Mamatas
"In Paris, In the Mouth of Kronos" by John Langan

One last thing. For anyone interested, I'm still offering critiques. $50 for a story 4k words long or under, 2-3 pages of comments. $50/hr, minimum 6 hours for a full-length novel manuscript, 8-10 pages of comments, pointing out strengths/weaknesses/trouble areas with characterization, plot, style, narrative voice, momentum, etc. Just drop me a line here or at PicSelf1@aol.com.

And how's everybody else doing?
Posted by Tom Piccirilli at 4:31 PM 10 comments: 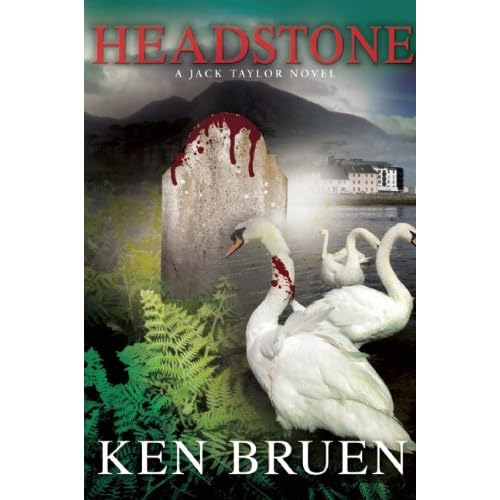 I just finished HEADSTONE, the latest Jack Taylor novel from Ken Bruen, and my friends it's a serious rip-snorter. In this one JT goes up against a group of youths who are devoted to the idea of killing off "misfits," including homosexuals, alcholics, the mentally handicapped, and pretty much anybody they just don't like. And, as you might guess, they really don't like Jack. After he and his two companions--Garda Ridge and the erstwhile ex-con Stewart--all receive miniature headstones in the mail, they know they're on the list of undesirables. Meanwhile, the cold and calculating Father Gabriel hires Jack to chase down another priest who absconded with certain church funds set aside for a satellite group of priests called the Brethren who are apparently up to no good.

Jack trudges through his cases even while he makes plans to meet with his current lady love, an American he had a whirlwind affair with in Paris and who might just be able to lift the darkness from Jack's heart, at least for a while. He's at the whim of his own history, constantly thinking about his sins and his life's small graces. The lessons of his late father spur him on, and friends and enemies from the past seemingly come out of every piece of woodwork.

All the JT books are savage reads but HEADSTONE goes to very wild, deep crevices. Bruen almost gleefully tortures his protagonist, giving him a ray of hope and happiness before quashing it. He falls into the clutches and traps of his enemies time and time again, only to survive with greater scars. It's a tremendously brutal and bleak read, but you're not reading Ken Bruen for butterflies and giggles. You want him to take you to that stinging knife-edge, and he does so with skill, poetry, and honesty, and without reservation.
Posted by Tom Piccirilli at 12:50 PM 6 comments: