As a former Leisure author I can attest to these folks' shenanigans. I didn't have quite as many troubles as the current stable of authors seems to be going through in the face of Dorchester's near-bankrupcy and constant scrambling to find purchase in the new world of e-publishing. But I've been keeping to my own personal boycott since I parted company with them under a dark cloud back in 2005.

Now my pal Brian Keene is calling readers to arms. If you've been following his blog for any length of time you know the uphill battle he's been having with these people. Now he lays it all out on the line and asks for your help here. 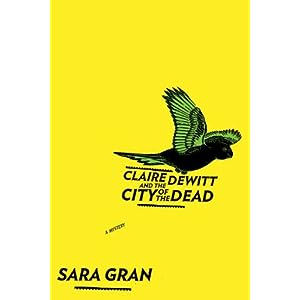 So I just finished an advance copy of wildly inventive mystery CLAIRE DEWITT & THE CITY OF THE DEAD, the first in a new series by the ever-impressive Sara Gran. You get a serious bang for your buck here, kids, because this one has got it all. It’s a gut-clencher of a crime novel that tackles the concept of Mystery with a towering capital "M", offering up a unique perspective on exactly what drives someone to look for answers and unveil secrets that nobody really wants known.
Claire DeWitt is the world’s greatest PI, a one-time Nancy Drew teen-queen of deductive reasoning who has since become a follower of the enigmatic French detective Jacques Silette, whose mysterious handbook Detection has led Claire to using the I-Ching, omens, her prophetic dreams, and mind-expanding drugs to help her solve cases along the way. And it’s cost her greatly–she’s lost her friends, family, and even her mind.

Now, still recuperating from a nervous breakdown, Claire is hired to find a respected D.A. who’s gone missing in New Orleans either just before, during, or shortly after Katrina. Is he just one of the storm’s many victims or did something else happen to him?
As powerful as Gran’s descriptive power of a decimated New Orleans is--both the place and the people--Claire’s backstory is just as riveting. We discover that she was mentored by the late, brilliant Constance Darling, a contemporary of Silette, who devoted much of her life to trying to find Silette’s vanished young daughter, and who was murdered in an act of unfathomable violence. Claire, too, lost someone close to her. Her best friend as a teen, who disappeared from a subway station and has never been seen again. These awful mysteries haunt her and drive her forward, consuming her dreams and offering bizarre clues to current cases. The book Detection is her bible, a contradictory text that seems to almost revel in the fact that it pushes Silette’s followers to the edge of sanity. Gran populates the novel with other once-famous, now fallen detectives. Iconic Sam Spade/Philip Marlowe-like figures who were shattered beneath the overwhelming truth that you don’t actually seek out mysteries, your mysteries seek you.
This is a sharp, smart, wry work, the perfect opener to a series that’s bound to draw readers in from all neighboring genres of mystery: fans of horror, fantasy, and noir will all be invigorated by Gran’s offbeat fusion of the mysterious and the mystical. And if you’re anything like me, as soon as you finish CITY OF THE DEAD you'll be clamoring for the next Claire Dewitt adventure.
Posted by Tom Piccirilli at 4:33 PM 3 comments:

ESC is Music to Keene's Ears

My big thanks go out to my little bro, Brian Keene, for his gracious comments about EVERY SHALLOW CUT.

"With an already-impressive body of work behind him, Piccirilli delivers his greatest book yet with Every Shallow Cut. Piccirilli's prose is stripped-down and almost acoustic for this effort. Every word counts... and cuts. If this were music, Every Shallow Cut would sit right alongside Bruce Springsteen's Nebraska, Johnny Cash's American Recordings, and Neil Young's Harvest Moon. Highly recommended."--Brian Keene