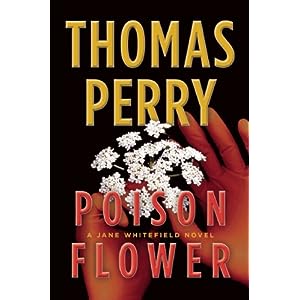 POISON FLOWER is the seventh novel in Thomas Perry’s highly acclaimed Jane Whitefield series, about a Native American "guide" who helps "runners" to escape from their enemies. In the past Jane has helped women disappear from abusive husbands and helpless witnesses elude drug cartels. In POISON FLOWER Jane plans and executes a daring courtroom breakout for James Shelby, an innocent dupe unjustly convicted of his wife’s murder. Things go perfectly for Shelby, but not so great for Jane herself, who is immediately abducted by a group of men posing as cops, shot in the leg, and tortured for answers on the whereabouts of Shelby.

Drugged and in agony Jane summons all of her willpower to keep quiet in the face of her torment even while she dreams of ancient Seneca warriors and the ghost of Harry Kemple, her one past mistake, a poker player she originally spirited away into a new life and then accidentally betrayed to a clever killer.

Refusing to give up Shelby’s only infuriates her captors, who work for the wealthy man who actually killed Shelby’s wife. Eventually she’s given up to auction–where all of evil adversaries of her previous runners gather together to bid on the chance to personally enslave or kill her.

But as any fan of the series knows, Jane is no weak lily. Instead, she’s quite a poison flower herself, prepared to do battle to the very end.

With a Perry novel you get full-on, relentless suspense and pretty much non-stop action. But smart, intense action. It’s not just a wild flurry of blood and killing, but instead wisely parceled out doses that build naturally upon character and narrative. Even when things get very nasty, the bloodletting only progresses the plot. One of the most fascinating elements of the series is how Jane draws on the lessons and traditions of the Seneca tribe in order to survive her adventurous life and dispatch her foes. POISON FLOWER is classic Perry, a novel that hurtles down desert highways at triple digits and will leave you with blisters on your hands from flipping pages so fast.

Posted by Tom Piccirilli at 2:25 PM

Hmmm...always on the lookout for a good read and I came here via the recommendations of Ken Bruen (whose Jack Taylor mentions in 'Headstone') and Adrian McKinty, two canny Irishmen who know how what to do when pen hits paper.
That said, this book is in the crosshairs of my minds eye...looking forward to it