THE FEVER KILL now available as a digital download for $3.99 from Crossroad Press.

Crease is going back to his quaint, quiet hometown of Hangtree. It’s where his father the sheriff met ruin in the face of a scandal involving the death of a kidnapped little girl and her missing ransom. It’s where crease was beaten, jailed, and kicked clear of the town line ten years earlier.

Now Crease is back. He’s been undercover for so long that most days he feels more like a mobster than a cop. He doesn’t mind much: the corrupt life is easier to stomach than a wife who can’t understand him, a son who hates him, and a half-dozen adopted kids he can’t even name anymore. He’s also just gotten his drug-dealing, knife-wielding psycho boss Tucco’s mistress pregnant. A fine time to decide to settle old scorers and resolve a decade-old mystery.

With Tucco hot on his tail, Crease has to find his answers fast. Who kidnapped little mary? Who really killed her? Was his own father guilty? And what happened to the paltry fifteen grand ransom that seems to spell salvation to half the population of Hangtree? The town still has a taste for his blood and secrets it wants to keep. Crease has a single hope; a raw and raging fever driving him toward the truth that might just burn him up along the way.
"A wondrous blazing talent... Intense and astonishing!" --From the introduction by Ken Bruen
"It's the rare crime novel that pulsates with the nightmare intensity of THE FEVER KILL. Piccirilli pulls it off masterfully." --Charles Ardai, editor of the Hard Case Crime series
"THE FEVER KILL is a rattlesnake-mean noir... powerful, hard-hitting, fearsome stuff." --Ed Gorman 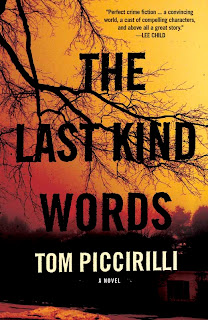 Preliminary cover art for my next novel. What do you think, gang?
Posted by Tom Piccirilli at 4:41 PM 9 comments:

My new column "Dead Mower Dreams and the Weeds of Boo Radley" is now up at the Mulholland Books site: http://ow.ly/2rPIt
It's my take on life during the recession, battling a mid-life crisis (and losing), and trying to navigate through the ever-changing world of publishing and willful illiteracy.
Posted by Tom Piccirilli at 10:43 AM 8 comments:

Pleased to report the full table of contents of Ellen Datlow's upcoming anthology SUPERNATURAL NOIR. Very proud to have my tale appear besides the work of so many uber-talented folks.

SUPERNATURAL NOIR, edited by Ellen Datlow
Introduction Ellen Datlow
The Dingus by Gregory Frost
The Getaway by Paul G. Tremblay
Mortal Bait by Richard Bowes
Little Shit by Melanie Tem
Ditch Witch by Lucius Shepard
The Last Triangle by Jeffrey Ford
The Carrion Gods in Their Heaven by Laird Barron
The Romance by Elizabeth Bear
Dead Sister by Joe R. Lansdale
Comfortable in Her Skin by Lee Thomas
But For Scars by Tom Piccirilli
The Blisters on My Heart by Nate Southard
The Absent Eye by Brian Evenson
The Maltese Unicorn by Caitlín R. Kiernan
Dreamer of the Day by Nick Mamatas
In Paris, In the Mouth of Kronos by John Langan

Look for the antho at some point next year. I'll, of course, report when I have more info.

Also: Bev Vincent had a little more information about the upcoming anthology SPECTERS IN COAL DUST, edited by Michael Knost. I hadn't heard who else was slated for the book, but Bev reports that besides me and him, the lineup will include Gary A. Braunbeck, Christopher Golden, Steve Rasnic Tem, Elizabeth Massie, Lee Thomas, Ronald Kelly, William Meikle, Nate Southard, Joshua Reynolds, Barbara Jo Fleming, Brian J. Hatcher and Michael Bracken. To be published this fall.

And: just received the gorgeous chapbook of Joe Lansdale's DREAD ISLAND, which is being used to promote CLASSICS MUTILATED, a new antho line coming from IDW. My tale "Benediction," about a hitman forced to deal with witches and a succubus in the form of Jayne Mansfield, will appear beside such fellow contributors as Joe Lansdale, John Shirley, Nancy Collins, Mike Resnick, Kristine Rusch, Thomas Tessier, Marc Laidlaw, and Rio Youers.

Speaking of Joe Lansdale, he'll be editing a reprint anthology of supernatural/horror/crime/noir fiction entitled CRUCIFIED DREAMS. All I know about it so far is that it'll be out from Tachyon in early '11 and feature fiction by the likes of Joe Hisownself, Harlan Ellison, and David Morrell. He's taken a reprint of my novella "Loss," a noir-ghost story fusion that spotlights a talking monkey and the real creator of aluminum foil.

Here's the product description I nabbed from Amazon: "Crossing noir with the supernatural, this luridly visceral anthology attacks polite society and plunges into the unthinkable horrors lurking in its underbelly. Searching for some beauty in a time of increasing poverty and neglect, the desperate are all the more menacing, and in a brief moment, ordinary people turn into something far less human. Offering stylish yet savage tales of private dicks, serial killers, lurking demons, and femme fatales, these surreal and often bloody tales provide glimpses into sinister worlds that mirror our own. Boasting an intriguing assortment of stories from celebrated authors such as Harlan Ellison, David Morrell, and the infamous editor himself, each gritty and sensational undertaking proves that being human is a far cry from being civilized."

Also, I just returned the line edits for my next novel THE LAST KIND WORDS to my editor at Bantam. Man, these people have some eagle eyes and caught a ton of small (and not so small) errors on my part. Big-time kudos to the editors and copyeditors who go all out to make the authors look so damn good.

LKW looks like it's slated for an April '11 release in trade paperback.
Posted by Tom Piccirilli at 6:59 PM 6 comments:

Jenks and Hale aren't friends, partners, or even next door neighbors anymore. Not since they each lost their jobs and had their homes foreclosed. Not since they lost their wives and kids and whatever stability they'd fought for in the world.

Adrift on the streets of New York, Jenks' dark path seems to parallel Hale's step by step. After Hale is found nearly dead beside the corpse of a nine-year-old girl, and soon after commits suicide in a mental hospital, Jenks decides to find out just what the hell happened.

Because whatever happens to Hale happens to Jenks just a few months later.

This book is available for $4.99 in MOBI (KINDLE) - EPUB (Sony/Nook) - PDF (Adobe) and PRC (Mobipocket) formats. Please choose your preference from the dropdown menu below before proceeding to checkout.

==
Over the next few weeks I'll be making several of my out-of-print and rarer novels available via Crossroads Press in Kindle, PDF, and other various formats. Some will also be released as audio recordings. As a self-professed Luddite this is all new territory for me. Let me know what you kids think of it.
Posted by Tom Piccirilli at 12:26 PM 4 comments: