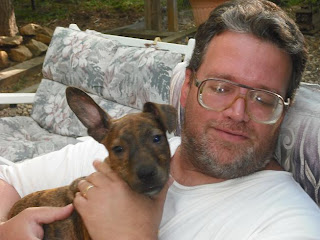 That’s our new puppy Dash(iell Hammett). We found him at the pound where the poor little guy had already been through eight miles of hell. He was an abandoned stray, survived Parvo, and just got over a bad bout of pneumonia. Now he’s active, healthy, putting on weight, and a total joy.

Although the publication date of THE LAST KIND WORDS is still eight months away, you can pre-order it now from Amazon. Standard discount is already in place, so you can save yourself over 30% on the cover price. As soon as ordering info is up at B&N and elsewhere, I’ll relate that info here too. No cover art yet, but you can bet a dog will be on it.

Even if you’re not inclined to purchase the book at this time, I’m hoping fans will stop by and "like" the page, add a few Amazon tags, or start a discussion.

THE LAST KIND WORDS is the story of a young thief named Terrier Rand who returns to his criminal family (each member of whom is named after a different breed of dog) on the eve of his brother Collie’s execution. Collie went mad dog for apparently no reason and went on a killing spree murdering eight people. Now, five years later, Collie swears he only killed seven people, and the eighth was the work of someone else. Terry not only has to deal with an ex-best friend, a former flame, some mob guys, and other assorted badasses, but he’s also forced to investigate that night his brother went crazy and find out if Collie is telling the truth. But more than anything, he really wants to know the reason for why his brother went on a spree, in the hopes that Terry himself is never pushed to that kind of edge.

But at its heart this story is a family drama, about Terry’s search for his own identity amidst all the usual conflicted emotions we have for our loved ones and our own personal histories. Is he anyone special if he’s not doing what he does best? Can he really turn his back on the people who accept him for who he is despite his flaws and his past? Can he ever live with the guilt of abandoning his girlfriend? And can he survive his own covetous nature in wanting his best friend’s life, wife, and child, the life he could’ve had himself?

Currently I’m working on the sequel THE LAST WHISPER IN THE DARK.

A few blurbs from some of the biz’s most talented and generous people. My undying thanks to them all:

"Perfect crime fiction...a convincing world, a cast of compelling characters, and above all a great story."--LEE CHILD

"Tom Piccirilli is clearly a writer to embrace now before he becomes huge. In THE LAST KIND WORDS he takes us inside a mutated family of crooks and unleashes a stunning story that ranges far afield at times but never truly leaves home, a place where shadows grow in every corner. It’s superbly told, with prose that doesn’t mess about or flinch from evil and characters who are best known from a distance."–DANIEL WOODRELL

"For the first time since The Godfather, a family of criminals has stolen my heart. A brilliant mix of love and violence, charm and corruption. I loved it."–NANCY PICKARD, author of The Virgin of Small Plains

"You're in for a treat. Tom Piccirilli is one of the most exciting authors around. He writes vivid action that is gripping and smart, with characters you believe and care about. I always pay attention when I see his name."–David Morrell, New York Times bestselling author of FIRST BLOOD and THE NAKED EDGE

"You don't choose your family. And the Rand clan, a family of thieves and killers, is bad to the bone. But it's a testimony to Tom Piccirilli's stellar writing that you still care about each and every one of them. THE LAST KIND WORDS is at once a dark and brooding page-turner and a heartfelt tale about the ties that bind. Fans of Lee Child will love this hard-boiled, tough-as-nails novel."–LISA UNGER, New York Times bestselling author of FRAGILE

"A modern noir master, Tom Piccirilli's usual propulsive prose and relentless storytelling are on display in THE LAST KIND WORDS, but it's his sense of relationships and the haunting power of family that lifts his writing beyond others in the genre. A swift-moving and hard-hitting novel, THE LAST KIND WORDS reads as if it's being whispered to you in a dimly lit bar where violent men, tough women, and powerful ghosts flicker in the mirrors."–Michael Koryta, Edgar-nominated author of SO COLD THE RIVER

"There's more life in Piccirilli's THE LAST KIND WORDS (and more heartache, action, and deliverance) than any other novel I've read in the past couple of years. Nobody in crime fiction is doing a better job than Tom Piccirilli right now. Simple as that."–Steve Hamilton, Edgar Award-Winning Author of THE LOCK ARTIST

"Tom Piccirilli 's narrative voice is one of the most stylized and fearless of the current batch of neo-noir novelists."–Crime Factory
==

Also coming up: more ebook releases of my out-of-print stuff. My first ever zombie novella entitled PALE PREACHERS will see print from Creeping Hemlock Press. And another short novel along similar lines to Every Shallow Cut called WHAT MAKES YOU DIE, published by Apex.

People: Remember that writers and other artists live and die by word of mouth. Readers, fans, critics, keep reviewing books, films, and other creative product as much as you can. On Amazon, B&N, your blog, on Goodreads, message boards, wherever. We could always use more feedback. Send notes and emails to your heroes. Make sure you review a book, indie film, or some other piece of art today. Talk them up. Promote, publicize, keep the creative impulse alive. We need you, folks.