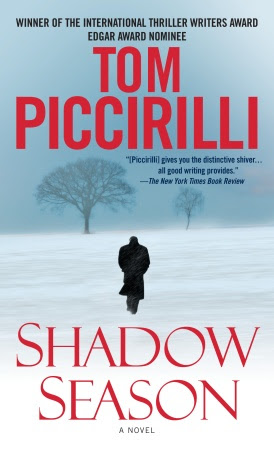 So as of May 27 I’m now I’m 44–a hard eight as you craps shooters say–and another year closer to 46, which is something of a benchmark as it’s the age my father was when he died. Who knows if I’ll make it (place your bets, everyone). My mid-life crisis started a couple of years ago. I’m not sure when it’s supposed to end. With the advent of classmates.com and Facebook, clearly I’m not the only one suffering through severe bouts of sentimentality and romanticized youthful times. I suppose it’s just a part of what everyone goes through. We’re just louder about it because we all fucking blog.
So, some news:
You can find my article on Korean crime/horror films in the latest issue of Asian Cult Cinema (#62), including my reviews of Our Town, Dream, The Chaser, and Open City among others.
The cover for SHADOW SEASON has been finalized. It’s a bit tweaked from the previous images I’ve posted (now with "Edgar Award nominee" listed among my attributes). I think it’s a real grabber and hopefully it’ll pop nicely on the shelf. The book is due October 27 but of course you can pre-order now from Amazon or B&N.com. Also remember to spread the love and support your independent bookstore.
I recently placed my first script with Marvel. I’m playing it close to the vest for the time-being until all the paperwork is signed, etc., but this is a real dream come true. Comics have been a big part of my life, both personal and creative, since before I could read. I clearly remember my brother handing me issues of Daredevil #4 (1st app. of the Purple Man) and Avengers #5 (first app. of the Lava Men) when I couldn’t have been older than two or three. Although my collection has thinned considerably over the years, at one point I owned about 8k comics, all properly backboarded, bagged up and boxed. The collector’s bug, that need to own every issue of every series that came out every month, eventually left me and I sold off about half my comics. Which means I currently own about 4k, including DD #4 and Avengers #5 (though not the same copies my brother gave me).
From the You’ve Got to Check This Out Dept:
Gillian Flynn’s second novel DARK PLACES is out now. Her brilliant SHARP OBJECTS was an Edgar Award nominee and DARK PLACES might even be more twisted, naughty, and noir-stuffed. It follows the story of the lone survivor of a family slaughter, alternating between the narrative of that emotionally screwed-up young lady and flashbacks of her murdered mother and her brother, the supposed killer. A real grabber of a novel that is mysterious and haunting in the best ways.
Also, out now on DVD is J.T. Petty’s THE BURROWERS. A horror-western film that is gripping, realistic, grueling, and genuinely disturbing. The story focuses on a posse hunting after a missing family believed to have been taken by renegade Indians. But soon it becomes apparent that something else, something inhuman, has stolen the folks. There are scenes that won’t be leaving your mind anytime soon. This is one unsettling, nihilistic gut-stomper the way great horror fiction/film is supposed to be.

Posted by Tom Piccirilli at 3:58 PM

Happy birthday for a couple of days ago, you tardy son of a bitch. What am I supposed to be, psychic? Jesus wept.

Been meaning to check out THE BURROWERS. Heard very good things.

I turn the big 5-0 the day after your book comes out.

I hear you on the stock-taking, soul searching mind-set.

Hopefully we've lived such different lifestyles than our folks that we will surpass them, age-wise when it's our turn to go...

Happy Birthday to you, Tom. 44 is good. It's also the caliber of a pretty good gun.

And big back pats for the Marvel job. I've loved Marvel ever since Galactus scared the hell out of me on a two-page spread in FF. I know you'll do a cracker jack job.

Thanks for the tips on Gillian Flynn and The Burrowers. I'll pick those up pronto.

Have a good one!

Happy birthday, Tom -- turns out we're only weeks apart in age. And, yes, like you and Josephine, I understand the bittersweet, nostalgiac inclinations...must be the nature of the (aging) beast.

I'm so glad and enjoyed your BLOG, It is very informative on the subject or topic, and Thanks For Sharing this post. I have something to share here www.avg.com/retail