Having Fun with Duane Swierczynski 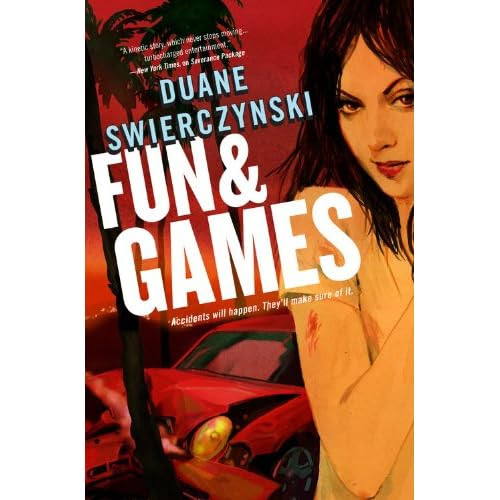 Just finished an advance copy of Duane Swierczynski's next novel FUN & GAMES, the first in a trilogy from Mulholland Books. Book 2: HELL & GONE and Book 3: POINT & SHOOT will come out in short order, just four or five months apart. It's a rocket of a read, about Lane Madden, a noted actress who's being hunted by "the Accident People," a shadowy organization connected to the Hollywood establishment that seems to have all-powerful connections. They clean up Hollywood's power elite's messes, and if you happen to be a part of that mess, as Lane is, they clean you up too.

Into this set-up wanders Charlie Hardie, a house-sitter/kinda-ex-cop who winds up running afoul of the Accident People and trying to protect Lane from near-omnipotent foes. He’s threatened, beaten, stabbed, tasered, poisoned, bushwhacked, and shot. But Charlie's already survived a couple of serious syndicate hits, and he's just too stubborn to die.

Duane takes no prisoners here (not that he ever does). It's a speed demon narrative that doesn't slow down for a second, not even while taking vicious and violent hairpin turns. Some of these scenes are bound to tie you in knots. The story bounces and whip-cracks and peels out, but instead of shaking the reader loose it just manages to grab hold of you that much tighter. Make sure you have a day set aside when you start FUN & GAMES because once you turn to page 1 you're strapped in for the full wild ride.

Posted by Tom Piccirilli at 2:03 PM

Looks very promising. I've had this author's name on my watch list ever since I read Brian Keene praise Severance Package a while back. Haven't read his work yet, but fully intend to.

You'll love Duane's stuff and be completely addicted as soon as you give any of his books a try.

"once you turn to page 1 you're strapped in for the full wild ride."
I experienced the same with Expiration Date.

I throughly enjoyed this wild-ride of a novel and I'm looking forward to part II soon.

Someone needs to make the film....

Thank you for sharing this blog, It is an amazing blog, I am really impressed by your blog, It’s really useful www.avg.com/retail

You are a good blogger, you have a good command of a topic like this, I want more from you, I have also some Useful Links to share.