THE KILLER IS DYING by James Sallis 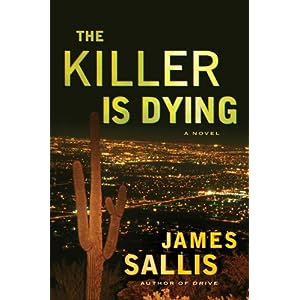 If you don’t already know who James Sallis is, then shame on your ass. Just keep your eyes open for the film version of his brilliant harboiled noir actioner DRIVE, coming to theaters everywhere with the mega-cast that the story so richly deserves. Directed by Nicolas Winding Refn and starring Ryan Gosling, Bryan Cranston, Ron Perlman, Christina Hendricks, and...well, I’m stuck on the gorgeous Christina Hendricks and can’t think beyond her, but lots of other cool people are in the flick too. Get your tickets early. But what you should do right now, this minute, people, is run out and pick up the novel DRIVE and any other Sallis book you can get your hands on, including the very hip Lew Griffin series that takes place in New Orleans.

Also, it’s time for you to pre-order his next novel THE KILLER IS DYING. A taut, cerebral, quirky, and punchy tale of a, well, no spoilers here, a killer who is dying. As the hitter, named Christian, faces the grand mystery, he also reflects on his own life and the various choices he’s made along the way. He’s not a whiner or a coward, not a sadist (unless you cross him in a bad way) or an animal. He’s an insightful, thoughtful, curious person about to take the first and final step beyond the veil, almost with a curious and hopeful air about him.

On his heels is a cop named Sayles, whose dying wife has withdrawn from him to face her own losing battle alone, a situation he can’t fully accept but must acknowledge. He hunts for Christian, called the Dollman thanks to the code words clients use to garner his services, but he’s not one of those brutally obsessed detectives burning with self-righteousness and a crazed need for justice. He too is more circumspect, doing his best to accept the world on its own terms.

The final thread of the narrative belongs to Jimmie, a teenager whose parents have simply abandoned him and their home in order to go their own way. Jimmie, a very enterprising kid, is amazingly adept at accepting adult responsibilities. He works a full-time job via eBay, buying and selling antique and offbeat products, especially toys. He’s an extremely capable lad, in control of his own fate, except for the fact that he’s having bizarre dreams. They turn out to be Christian’s dreams. Somehow he’s apparently attuned to the dying killer, and is drawn into nightmares and memories not his own.

Let me tell you, only James Sallis has the kind of cojones and skill it takes to throw these sorts of disparate elements into a story and make it all work. He’s a craftsman almost completely disinterested with the usual forms and techniques of crime fiction, choosing instead to center on minimalist meditations on life, dying, and death. This is an intricate, complex and poignant examination of three disconnected souls who somehow find consolation in each other despite remaining separate throughout the novel. It’s a wildly courageous gambit, but Sallis is a sharp and proficient artisan who makes it all work. Nab THE KILLER IS DYING asap and see for yourself.

Posted by Tom Piccirilli at 6:41 PM

you understand him well! Jim's came out recently in German. I'm interested about the professional reactions. It's quite uncommon as crime novel
tobias /Hamburg/Germany

You are a good blogger, you have a good command of a topic like this, I want more from you, I have also some Useful Links to share.