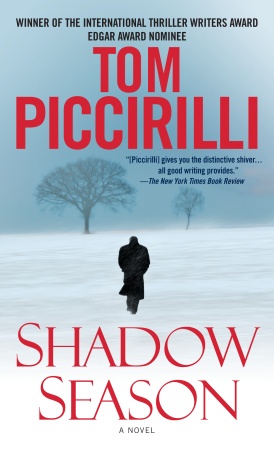 My new novel SHADOW SEASON hits bookstores today. Race across the face of the earth, people, and get your copy of SHADOW SEASON today. Hope you love the fuckall out of the book. If you do, and you blog about it, write a review on Amazon.com or B&N.com,buy extra copies for your mama & daddy... & the kiddies, spread the word, then you will be blessed by heaven and all the riches you so rightly deserve will be yours for the plucking.

You can find a new piece by Jeff VanderMeer on the Amazon blogs here: http://bit.ly/2UcuXg
Here's an interview with me up at The Big Adios focused on the writing of the book: http://thebigadios.yuku.com/topic/959
And a few really nice reviews:
"In Piccirilli's brooding, character-driven chiller, former New York City cop Finn, recently blinded, wallows in his new role as an English teacher at a posh girls' boarding school. A storm looms as Finn and a skeleton staff remain to supervise a handful of girls staying at the school during winter break. Piccirilli (The Fever Kill) harps on his theme of isolation with palpable glee as Finn, surrounded by self-absorbed adolescents and mysterious, brutally violent attackers roaming the campus, grapples with blindness amid a sonar-dulling snowstorm in a remote area with no cellphone service. Terrified of solitude and driven by his cop instincts, Finn embarks on a wrenching journey that exposes the raw emotion of a man nearly destroyed by disability and circumstance."--Publishers Weekly, starred review
"The Christmas recess has just begun at St. Valarian's, a private secondary school for girls in upstate New York. A handful of students and staff are still on campus as a nasty blizzard gathers strength. Finn, a blind and deeply conflicted former NYPD detective, teaches literature at the school and longs to murder Ray, his former police partner. Making his way across campus through the storm, Finn encounters a teenage girl, a townie, who warns him that an "ill will" is coming for him. Soon, students and staff are dying, and Finn must defend himself and the survivors. Shadow Season has enough mystery, suspense, dread, and mayhem to satisfy nearly every crime fan. Characters are well developed, but most maintain a hint of mystery. Finn's students, variously precocious, willful, mocking, and provocative, are totally believable. The blizzard ratchets up tension, as does our eagerness to learn why Finn wants to kill Ray. The portentous "ill will" may be a bit over the top, but the novel is terrific entertainment."- Thomas Gaughan, Booklist

Also, northern Colorado's biggest newspaper, The Coloradoan, had this to say: "This is an intense thriller not for sissies. The complex main character tears into savage situations described with authenticity as he grinds through each crisis while dealing with his blindness.You will appreciate the portrayal of the main character Finn's so-called disability, which really isn't one given the way he knows how to utilize it. The entire plot never lets the reader take a breath and never lets up on the gut-wrenching emotional safari into Finn's world of blackness.The dialogue, plot and the multi-layered character reveals itself to you with hammer blows page after page. Highly recommended for thriller fans who appreciate a quality read."

Congrats, Tom. Got our interview up here, as long as the publishers are OK...

Blood on the Page Blog