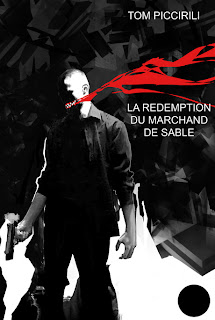 Posted by Tom Piccirilli at 2:51 PM

I like it a lot. Reminds me a bit of Sin City. I think this cover will sell books. I'd buy it.

I actually like this version better. Really catches the eye.

That is a really cool cover. Now if they could only spell your name right.

I have to admit, when I read the title to this post, my first thought was that you might be writing something in the DC/Neil Gaiman SANDMAN universe. I've enjoyed your HELLBOY work a lot, so that idea - for the brief second it lasted - was exciting to me.

Anyway, back on topic, I love the cover.

Yeah, luckily this isn't the finished version. The font will be changed and, hopefully, they'll learn to spell my name correctly.

Thanks for all the generous comments, folks.

Yeah, the Raggedy Ann had nothing to do with the book, but it evoked a feeling, a particular world view (a warped one). I liked it so much I ordered the book from amazon.fr, even though I don't read or speak French.

The French cover of "The Redemption of the Sandman" presents the book as a hardcore crime novel (to me). It may be a way to broaden your readership. The converted will buy it, anyway. It's striking.

That’s right, this website is one of the top 12,000 most viewed in FUCKING PAKISTAN.
Why? Because they are the “English speaking writers” this fucked up company hires. I have also found evidence that suggests they have other writers in India and the Philippines. I know of a couple of companies that offer real English writers and I thought was one of them. Turns out they’re just a bunch of liars.

The scam is real. They are thieves who could care less about you. Maybe you’ve had a couple decent papers from them. But sleep well knowing that they will take any measure to screw you over.

That’s enough. Rant’s over. Fuck you,

Reviewed by Sean Evans on March 25,2013 – Rating: 1.0
Miserable experience.They ripped me off for $600 for a dissertation and refuse to give me my money back.”
2 THOUGHTS ON “MY REVIEW”
Taylor on June 4, 2013 at 10:52 PM said:
You are right. I have been debating with them for at least a month now, trying to get my refunds, it’s because the writer can’t even write shit or follow the prompt. Claimed to be “professional” yeah right. They also claimed that they refunded my money already by just clearing out my balance. However, the email I received from money bookers still saying I was charged on that date. They lied & keep on saying “your refunds should be in 4-6.” i waited & after 2 weeks, still nothing. I keep on checking back even though they closed my inquiry many times. I mean, I only uploaded $55 for the balance, but I didn’t use it. The money isn’t that a big deal, it’s just the writers & their service is poorly done. I cancelled the writer because 1. Passed deadline 2. The paper was off topic, completely vague, lacks development & much more. 3. way different from U.S writing style 4. Busy schedule & I just want to try how this service work. Personally, i definitely to not recommend this service.